Forest City Gallery Intern, Dean Keranovic, sat down with emerging, textile- artist Amélie Brisson-Darveau to discuss her work which is on exhibition at Forest City Gallery from November 1st to December 14th, 2013. Dean provided us with an article highlighting Amélie’s inspirations, aspirations and her affinity for textiles. 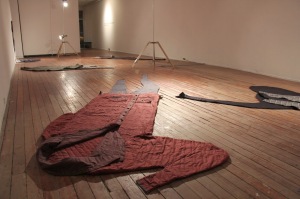 Canadian born artist Amélie Brisson-Darveau has recently exhibited Pars mais prend bien soin de revenir (Leave but make sure to return) at Forest City Gallery.  Expanding on her fascination and exploration of shadows and fabrics, Amélie focuses on the body and its movements in relation to architecture, literature, and textiles.  Though drawing inspiration from many sources, Amélie does not take her work too seriously, which makes for a fun experience.

Upon entering the gallery, the space is littered with abstracted bodies that Amélie fashions out of fabrics.  Each body is a reconstruction of a shadow found in ertain texts pertaining to the protagonists’ loss of their shadow.  Amélie dresses each body with fabrics that are functional pieces of clothing (adorned with button and zippers) but the usability of them is left to the imagination.  Lights that are positioned around them emphasize the features of each body, and this is where the fun comes in.  Almost immediately you become hyperaware of your own shadow as it is cast upon each body you walk by; you are encouraged to outsize the bodies on the ground, projecting your shadow onto them by whatever position possible.  It’s amusing watching people struggle to do this, as everyone has their own way of moving their bodies and thus everyone, for the most part, ends up with a different final position.  All the while this is happening, an audio recording is played in the background consisting of excerpts from the above referenced texts.

Pars mais prend bien soin de revenir can almost be seen as the next installment of Amélie’s work involving fabrics.  Her interest in textiles and fabrics originated all the way back to her bachelors.  Initially, it was the potential Amélie saw in clothing as a material that sparked her interest.  Her projects focused around how clothing was used as a measurement of the body and its relation to the shape of the body as well, only introducing shadows when she reached her masters.  Of course Amélie has come a long way since her studies and has been influenced by many ideas, such as the notion of the parasite by French philosopher Michel Serres.  However, it was the story of Peter Schlemihl, by Albert von Chamisso, in which Peter’s shadow is being rolled up by the Devil, which gave Amélie the inspiration to create this project.

After the fun of outsizing these shadows, we are left with an image of our shadow being clothed, as if we are wearing our own shadow.  When asked about this, Amélie responded that to wear ones shadow is to be in a place of absence and presence simultaneously.  To be in between this duality is an attempt to erase that duality, in which Amélie succeeds in doing.  The shadows on the ground are motionless and created without the help of a host to give it form, while the clothing, although functional, is unusable.  So what is left is an image that has already been produced without the help of a bodily host; it is then up to the spectator to move their bodies accordingly so they may conform to the shadow, reversing the spectator’s role from host to a slave of the image.

Unfortunately, Amélie has already returned to Zurich where she lives for the time being.  Pars mais prend bien soin de revenir will be at Forest City Gallery from November 1st to December 14th, 2013.